How will the Bangladesh-Pakistan first Test wicket be in Chittagong?

How will the Bangladesh-Pakistan first Test wicket be in Chittagong?

Bangladesh's first Test against Pakistan in Chittagong at midnight. However, before the start of the first Test, there is no excitement and excitement among the fans this time. Instead, everyone is worried. Doubt, worry, apprehension. All in all, the three-match T20 series against Pakistan at home has been whitewashed after the catastrophic devastation of the T20 World Cup. I do not know what happens in the test? 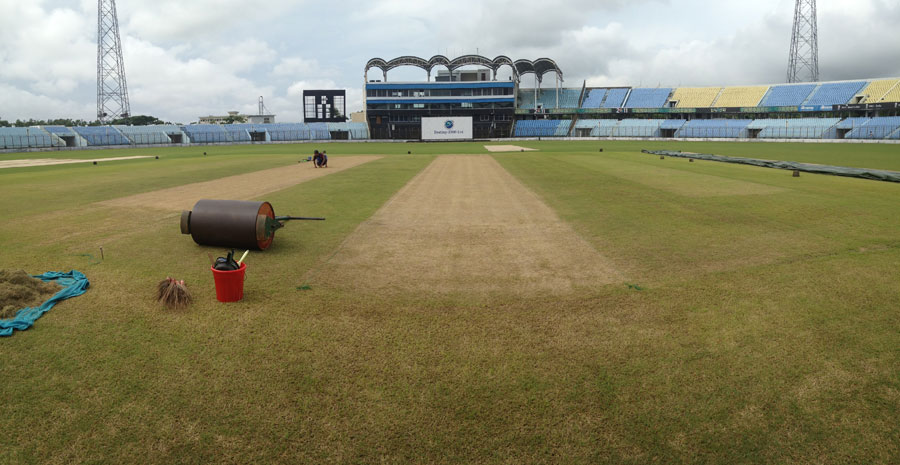 There are three to four senior cricketers on the team. All those who are in the front row as performers. Tamim Iqbal is not there already. Shakib Al Hasan is not playing with him in the first Test. Mahmudullah Riyadh, who scored a century in the last Test against Zimbabwe in July this year, is also retiring. And at the last moment, Taskin Ahmed could not play due to pain in the palm of his hand and finger.

This means that the Tigers do not have almost half the power of batting and bowling. It is not uncommon to have doubts about how much Muminul Haque's team can do with this decaying power.

So everyone is curious about the wicket of Zahur Ahmed Chowdhury Stadium, 'How will the pitch be? Batting friendly as before? Will the batsmen be able to bat comfortably when the ball comes to bat? Or the ball will continue to spin from the beginning.

The newly laid wickets at the Zahur Ahmed Chowdhury Stadium

Curator Zahid Reza Babu, who can give the best answer to this question, is silent. Before the start of the test, the curators are under strict ICC surveillance and prohibition. The media is far away from the behavior of the wicket, the coaches, captain-managers, and players of the two teams are not allowed to talk to anyone.

Zahid Reza Babu, the curator of Zahur Ahmed Chowdhury Stadium, did not say a word about the wicket in the conversation with Jago News. Just saying, Sagarika's wicket is always the same. As you have seen before. No novelty, no innovation.

That's the big message. This means that there is no possibility of any change in the basic character of the pitch of Zahur Ahmed Chowdhury Stadium. The wicket is the same as before - meaning batting friendly.

That means an average of 290.75 runs per inning. It's not a bad thing, but it's not a bad thing at all. According to history, the wickets were also in favor of the batsmen in the Test match against the West Indies on February 3 this year.

In that match, Bangladesh's score was 430 and 233/6 was declared. The Caribbeans chased down a huge target of 395 in the first innings and won by 3 wickets.

West Indies won by 395 runs in the fourth innings, an achievement of the Caribbean. And the failure of Bangladesh bowlers. They could not defend about 400 runs.

But we also have to talk about wickets. The wicket was also batting-friendly in the fourth innings on the last day. Not broken. Some long-lasting wounds were not made. The ball did not jump dangerously. Nor did it become unusually low. And did not turn.

Therefore, it can be assumed that this time after 9 months, the wicket of Sagarika Zahur Ahmed Chowdhury Stadium will remain batting-friendly even in the very last part of November.

And there is no logical reason to change the character of the wicket and track the spin like Sher-e-Bangla. Because Pakistan is no longer England-Australia or New Zealand, they can be defeated and humiliated with a tortoise speed and a waist-high bounce, and a 'big' turn. The Pakistani spin attack is richer than in Bangladesh. And Babar Azam, Azhar Ali, Fawad Alam, and Imam-ul Haq have also grown up playing on the spin track at home. It would be foolish to think of defeating them with a spin.

A typical figure is seen throughout the T20 series. Mahmudullah Riyadh and Babar Azam are coming down to toss at noon. Mahmudullah continues to win the toss and decides to bat. In all three matches, Babur said he would have fielded before winning the toss. In the end, Pakistan won three matches. In a virtual press conference on the eve of the match, Bangladesh captain Momina Haque said that he thinks Sagarika will be the helpful wicket as always. On the other hand, according to Babar, the Bangladesh team will welcome them by making Churchane a spinning wicket. That is why the Pakistan captain looked at the two spinners of the team.

When asked about the wicket, Momina said, "I think the wicket will be a very good batting wicket, will be helpful for batting. And you see the wicket better. Because those who see from outside understand better. Chittagong's wicket is always good for batting.

On the other hand, based on watching Wednesday's practice, Babar said, it could be a typical Bangladeshi wicket. However, although there was grass in yesterday's wicket, it has been cut off a lot. Babar didn't get a chance to see it before coming to the virtual press conference. Because even then the practice did not start in Pakistan.

"Looking at the pitch, it looks like a typical Bangladesh wicket," said Babar. There is some grass. What I saw yesterday (Wednesday) was grass. Today we will see again what the final situation was. Here is the help of spinners. The pacers also get help in the beginning. In my opinion, it will be better for us to adapt to the condition as much as possible.

Meanwhile, it has been found out about the wicket, Bangladesh captain Mumina's idea is correct. Sagarika's wicket is going to be Ramprasad as always. The average score of the first innings in this field is 362 and the average of the second innings is 342 runs. Maybe one more run match will be seen from Friday.